Today I welcome Jeff Lyons to my series of author interviews.  Jeff is a consultant on the craft of storytelling and has written two books on that topic:  Anatomy of a Premise Line: How to Master Premise and Story Development for Writing Success and Rapid Story Development: How to Use the Enneagram-Story Connection to Become a Master Storyteller. His fiction includes the sci-fi-horror novella, 13 Minutes, and the mystery-thriller series Jack Be Dead, which Jeff is writing with Stephen David Brooks.

Elizabeth: Welcome, Jeff.   The first book in your Jack Be Dead series, Revelation, was recently released. Tell us about that book. 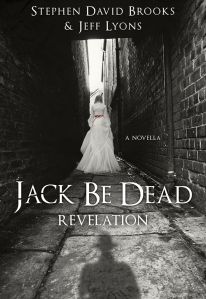 Jeff: Jack Be Dead was co-written with my writing partner Stephen David Brooks. Stephen is a film director and screenwriter, and the idea for Jack Be Dead was originally from a script he wrote years ago. We worked together, over time, to rework his script into a TV pilot but weren’t able to get any traction. Then I came up with the harebrained scheme to write the pilot as a series of novellas, and then maybe we could sell the books to a production company and get a deal that way. This strategy, by the way, is one that is being used by lots of screenwriters trying to get movie and TV deals. Leveraging the  self-publishing revolution is a powerful tool now for screenwriters trying to turn their old screenplays into novels (but that’s a whole other interview). Anyway, we wrote the first book last year and published it online under my publishing imprint, Storygeeks Press. It got a pretty good response, good reviews on and off of Amazon, but hasn’t taken off the way we’d hoped. But, we’re going to do the other two novellas in the series and then see what happens. Personally, I don’t really care what happens with any TV deal, the novellas are great to have published and will help me (and us) get a stronger footprint in the publishing world as authors of genre fiction. That’s really where the action is for writers anyway, not film or TV. If you want a career as a writer today you have to be writing in multiple arenas, on multiple genres, on multiple platforms, and for multiple audiences. The days of saying “I only write screenplays” or “I only write novels” are over. You have to diversify and be everywhere to be successful now. Just the reality of being a working writer in the 21st century.

Elizabeth:  When will the next book in the series be released?

Jeff: Not until next year. Stephen and I are too busy with other projects, and I have another writing book I have to get finished for my publisher: Rapid Story Development: How to Use the Enneagram-Story Connection to Become a Master Storyteller. It’s the only book that’s ever been written that teaches how to use the Enneagram system as a story development tool. It will be quite an event when it comes out in late 2017. The publisher is Focal Press. My other book with Focal Press is Anatomy of a Premise Line: How to Master Premise and Story Development for Writing Success and it is the only book available that teaches how to build a story from the ground up BEFORE you start writing pages, and can help writers cut their development time literally in half and save them a lot of wasted pages as they ramble on writing with no clue where they’re going. The worst advice people learn about creative writing in MFA programs is to “just do it.” Horrible advice for 99.9% of writers. My book can help save you from that bad advice and give you a solid alternative that will be productive and creatively alive.

Elizabeth: How difficult is co-writing a story? How does that process differ from solo endeavors?

Jeff:  The process is very different. I prefer writing alone, but Stephen and I have a great synergy. We complete each other’s sentences.  It’s kind of scary. Our collaboration is also very old, more than a decade, so we know how the other thinks and writes. We trade off breaking out story (development) and then take turns writing actual pages and then keep kicking things back and forth until we agree it’s done—enough. Because it’s never done.  It’s a great collaboration and works well with our mutual ambitions to get more film and TV work, though I am more and more focused on the book-writing world and self-publishing. That’s really where I want my career to go, because that’s where the real opportunities lie for writers.  Film and TV are nice, but the industry sucks, and it’s impossible to sell anything. Not so in the book world. As someone has already said, “The publishing problem has been solved.”  Not so much the getting-produced problem.

Elizabeth: Tell us about your “novelette” 13 Minutes.

Jeff: I decided to self-publish 13 Minutes this year. I’m getting more and more into self-publishing. This story is smart people’s sci-fi, meaning, it is not just sci-fi high concept, but rather a strongly character-based story that focuses on dramatic human relationships. 13 Minutes takes place over a short period of story-time, is set in one room, and has a great twist ending most people never see coming. It was great fun to write, and I’ll probably get it produced into a short film for film festivals next year. I have a director interested. It’ll be a great short film for the sci-fi community and for the web watchers.

Elizabeth: Can you tell us more about Storygeeks Press?

Jeff:  Storygeeks is a story consulting and story development services company I started in 2006 to brand myself in the story consulting world. While I still consult, have some clients, and teach, my focus now is on writing (novels, screenplays). Consequently, I’m moving away from the Storygeeks brand and focusing more on my own name and my author site. Storygeeks is still kind of “here” in the form of my self-publishing brand, Storygeeks Press, but otherwise I’m pretty much retiring that name and branding myself under my own name. People can still consult with me, but the best place to find me now is at www.jefflyonsbooks.com.

Elizabeth: How did you get into the business of being a “story teller consultant?’

Jeff:  That’s a very long story, but it started in the late 1980s. I slowly discovered that I had a talent for story. I didn’t know if I was a good writer yet, but I started to get the feeling I had good storytelling senses. You see, story development and writing are two different things. They have nothing to do with one another. They’re two different talents, and two different skill sets. You don’t have to be anywhere near a pencil and a piece of paper to tell a story. You can dance a story, mime a story, paint a story, writing is just one more way of conveying a story. Stories don’t need writers, they only need story tellers, and storytellers can tell stories in lots of different ways.  Writing is just one of those ways. The problem is that most writers think they can tell stories and they can’t. Most writers are good with writing, but weak with story.  Some people have what I call the “story gene” and they just “get” story. They have a natural talent for storytelling. I’m one of those people. I can also write (not great, but good), and it’s taken me many years to develop that talent into a craft skill that I can teach to others. That’s what story development is all about for me, teaching other writers how to develop stories and give them tools they can use for their entire careers to shore up their weak story stills. I do this for students, like through my Stanford University classes, privately, and I consult with film and TV production companies. You may not be a great storyteller, but you can learn the craft of storytelling and so become a better writer.  I’m convinced of that, and have seen literally thousands of writers improve their story skills, and so become stronger in all areas of their writing. I’m a writer first, but story consulting is the next best thing. There are lots of “story gurus” out there teaching all manner of tips and tricks and story snake oil. You have to find what resonates with you and then use whatever tools make sense. My mantra is:  Listen to everyone. Try everything. Follow no one. You are your own guru. It’s a story jungle out there.

Elizabeth: What have you read recently that you feel passionate about?

Jeff: Cruel Beautiful World (Algonquin) Caroline Leavitt. Caroline is a friend of mine and this is like her 10th book or something, and she’s on fire. I love her writing and want to grow up to be her. Her book comes out in October 2016, so buy it.

Elizabeth: Great recommendation! I’m adding Caroline Leavitt to my TBR list.  Can you tell us more about yourself?

Jeff: I like puppies, and double rainbows on rainy days, and long walks on the beach … and pulling wings off flies. Let’s leave it there, for now.

Elizabeth: Ha! We’ve reached the time in our interview for the let’s-get-to-know-the-author-better, nearly-pointless, sort-of-silly, rapid-fire questions:

Jeff: Ugh—both require you to have to move, right?

Jeff: Hmmm—aren’t they the same thing?

For more  information about Jeff Lyons and his work, follow the links below.