A few weeks ago a member of a historical novels group I belong to asked the question, “Which author first turned you on to historical fiction?” Because I read all genres and always have, I don’t have anyone who made me want to focus on historical fiction as some readers in this group do. It wasn’t a good question for me. However, a lot of people in the group answered the question, and many said Georgette Heyer. I’d never heard of Georgette Heyer, but so many people said so many good things about her novels, I decided I better read her.

Georgette Heyer published in the 1940s and 1950s, and my public library has about twenty of her books. I checked out two at random and was delighted with what I found. Heyer writes Regency romances—romances in the way of Jane Austen, figuring heavily on character and manners, with hand-kissing being a daring show of affection. Her women are spirited and fun, her men easy to fall for. Many of her plots end in imbroglios that belong on the French stage.  My family is getting used to me laughing out loud while reading Heyer. Her stories are humorous and warm-hearted.

Each time I finish a Georgette Heyer, I have that floating-on-a-cloud feeling you get at the end of a well-crafted romance. I want to pick up the phone and call Mom. I can’t, of course, so I think about the many wonderful phone conversations about books we did have, and I feel lucky. Lucky and unlucky. I miss her like a lost limb.

Today would have been my mother’s 71st birthday. 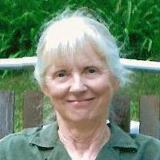 Welcome to my corner of the Historical Novelists’ Four-Day Book Fair. About forty authors are participating, so be sure to visit many of the fair’s books.

This is the stall for Syncopation: A Memoir of Adèle Hugo 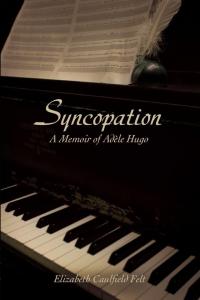 For humans there is only memory, and memory is unreliable.

In nineteenth-century France, a woman’s role was explicitly defined: she was a daughter, then a wife, then a mother. This view was held by novelist and poet Victor Hugo, but not by his daughter, pianist and poet Adèle Hugo. Under such constraints, what’s a woman of passion to do? Syncopation breathes life into the unconventional thoughts of this controversial female figure. An elderly Adèle recounts her desperate attempts to gain personal freedom. Her memoir blurs the fine line between truth and madness, in a narrative that is off-kilter, skewed, syncopated.

Order your copy of Syncopation, from Cornerstone Press.  Want to know more about the story?  Read on:

To life there is a rhythm one knows from the womb. It begins as the beat of a mother’s heart–slow and steady and safe. An infant finds the pulse in its own heart and continues the rhythm in its needy sucking. The toddler pitter-pats to the rhythm, and the sound of the servants starting the day carry it through.  The pulse is in the wind and the laps of the waves from the Seine; birds sing it and squirrels chitter it; the very soil under out feet moans and groans to its pounding.

In perfect time, from an especially forceful contraction, the baby fell into waiting hands. She screamed in blows staccato and clear, slowing rhythmically to a docile cooing more in tune to her station in life. Adèle was born an angel to a family of gods. Her father, Victor, was a poet, playwright, and politician, brilliant and beloved by his countrymen. She was named for her mother, the first Adèle,the most beautiful woman in France. Her brothers, Charles and François-Victor, were handsome, strong, and clever. And her sister, Léopoldine, was a model eldest sibling—doting and tender, never scolding or haughty. Her skin was a translucent mountain stream: cool and fresh and clean; her generous black hair captured the light and returned it in a blue sheen which mocked the night sky; the moon would hide when Léopoldine went out at night, the orb’s beauty waning in her glow. She was sweet like marzipan, gentle like a summer breeze, flexible like a reed, warm like an old Bordeaux. Léopoldine was perfect like a pearl.

Firecrackers exploded and people shouted when Adèle was born. It was July 28, 1830, the middle day of Les Trois Glorieuses, the three-day revolution protesting the tyrannies of King Charles X. With such a birthday, one knew at once that Adèle was born for glory and fame.

The Hugo house was the first on the newly constructed rue Jean-Goujon, with the wide fields of the Champs-Elysée as their backyard. The family had everything one could desire: parkland to explore, books to read, a small black piano, and each other.

And then one day, as a unit, this perfect family gasped. Those who survived missed a half-beat from the breath of life. If it had been a whole note, they could have perhaps fallen back into the rhythm, but it was a half-beat. They syncopated. They moved out of step, off-kilter. Forever more, they would run and jump and dream and scream, but they would be unable to slip into that easy rhythm, that regular beat that keeps time for the world.

—What are you doing, Dédé?

—You’ve not written them in first person, Dédé. Why do you write Adèle as if you are not Adèle?

—It is necessary. I will have more freedom in third person. I can explore the minds of others; I can write about places I have not been.

—Do you think that is a good idea?

—If I thought it were a bad idea, I would not do it.

–Au contraire, responded Didine.  You would do it exactly because it is a bad idea. I see a sparkle in your eye at the idea of committing mayhem. These “memoires” will surely make people angry.

—They have left behind children. The children will surely try to stop you.

—Stop the truth? I feel an obligation to let the truth be known.

—Is there not but one truth? responded Dédé.

—Perhaps for God. For humans there is only memory and memory is unreliable.

Thanks for visiting my virtual book fair stall.  From here, I recommend visiting Cornerstone Press and checking out other authors’ virtual stalls.

Today I’m welcoming Victor Hugo to my series of author interviews. Victor is the French author, playwright and poet of many works, such as the plays Hernani and Ruy Blas, the novels, Les Misérables and Notre Dame de Paris (sometimes called The Hunchback of Notre Dame), and many collections of poetry, including Feuilles d’automne, Châtiments and des Contemplations.

Victor: Thank you for having me.

Elizabeth: Your novel, Les Misérables, was converted more than twenty-five years ago into a very successful musical play and most recently into a movie. What do you think of these adaptations?

Victor: It’s an honor for my work to be sought out in this way. I feel that Les Misérables is one of my greatest achievements and for it to be brought to new generations is rewarding. I think it might have been more effective, though, if it had been done as a serious play. As many of your readers may know, I don’t care for music as an art form. Making my characters sing and dance creates an aura of superficiality and flightiness, making it seem as though these events could never have happened in real life, which is disappointing. It lessens the message of the novel.

Elizabeth: Did you realize that many who view the play Les Mis believe the stand at the barricades was a part of the French revolution?

Victor: Is this true? Pathetic. Those who cannot remember the past are condemned to repeat it. But don’t quote ME on this. I’m not really the one who said it.

Elizabeth: Which authors do you see as having influenced your writing?

Victor: Goethe is the first name that comes to mind. He revolutionized what it meant to be a writer; he understood the depth of ideas and emotion that could be transferred through a written work. Who else? I’m quoted as saying, at age fourteen, “I must be Chateaubriand or nobody,” although I don’t remember saying it. I met Chateaubriand once.  He was a belittling, arrogant man.

Elizabeth: You’ve written plays, poetry, novels and essays. Is there a format you prefer?

Victor: Not really. Each has a distinct purpose. A writer should know his purpose before writing and then choose the format that will help him accomplish it. A play has an immediacy not found in other genres; it creates a community of the audience who can be moved all together. A novel can create a depth of emotion difficult to sustain in other formats, and its ability to thoroughly express and share complicated ideas is unparalleled. I find, in my old age, that poetry most suits me now. I’m more reflective than I was in my youth, and I don’t feel the need to make grand, passionate statements that move a people to action. Through poetry I can thank God and my family for what I have and what I’ve learned about live. Hopefully others can read my poems and glean some small wisdom.

Elizabeth: If I may, I’d like to ask you some questions about your daughter.

Victor: Yes, of course. Léopoldine was perfection. I think I always recognized her as an angel, but I didn’t realize her time with us would be so short. I never fully recovered from her death.

Elizabeth: I didn’t mean Léopoldine. I want to ask you about Adèle.

Victor: Adèle? Who put you up to this? I refuse to talk about Adèle. In fact, you can consider this the end of —

Elizabeth: We don’t have to discuss Adèle; I’m sorry for bringing her up. In fact, I believe its time for the let’s-get-to-know-the-author-better, nearly-pointless, sort-of-silly, rapid-fire questions:

Victor: Through forest I will walk, o’er mountain I will fly

Victor: Hiking. I’m always telling my wife and daughters that they shop too much.

Victor: Fantasy. This may surprise you, but I wish that I’d written the Lord of the Rings. Perhaps in another life I am J.R.R. Tolkien.

I’d like to thank Victor Hugo for joining me today.

Thanks for playing along.  I hope you enjoyed meeting my Victor Hugo character. Although this interview was a piece of historical fiction, Victor did indeed write the books, plays and poems named above. He was the father of four children, all but one of whom he outlived. His “crazy” daughter Adèle stars in my novel, Syncopation.

I’ve been studying Victor Hugo and his work for several decades, and so for many of his answers I allowed myself to “channel” his thoughts. If you want accurate information about Victor Hugo, I suggest going somewhere more credible than a blog!

My favorite quick source for all things French is my Petit Larousee Illustré, 1987.

Thanks for joining me today and have a Happy April Fools’ Day!